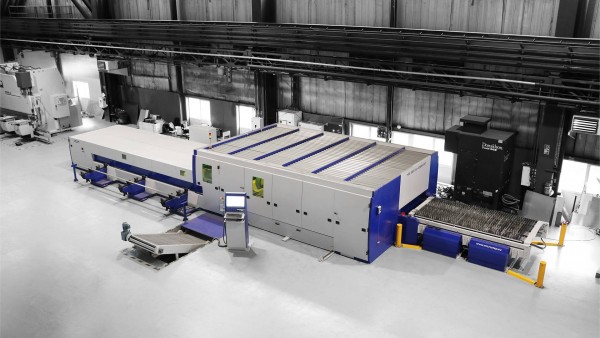 It has been more than 60 years since the first functioning prototype of a laser first saw the light of day. The technology began its triumphant advance in the field of cutting in the 1970s and has continued to develop. Where once a CO² laser did most of the work and for a long time a cutting system consisted of a 2D laser with a shuttle table, nowadays fully automatic cutting centres including all-round automation are increasingly in demand.

It is not known whether Albert Einstein could have imagined what applications the laser would one day be used for when he created the theoretical basis for “Light Amplification by Stimulated Emission of Radiation” in 1917. Theodore Maimann, too, probably had only a small idea of the importance that would one day be attached to the technology within industry. The “father of the laser” developed the first prototype, whose radiance was celebrated on the 60th anniversary in 2020. Laser technology is used in many sectors. It also, and especially, has enormous significance in industry. Here, cutting, welding, drilling, engraving, polishing and more are carried out. Fast and precise. In the laser cutting sector, there have been several evolutionary leaps in the past decades. For a long time, the core element was a pure 2D laser cutting system. It became even more precise, it became even faster, the laser rotator for bevel cutting was added, the fibre laser stood up to the CO2 laser. What remained was the focus on a cutting centre with an automatic shuttle table. But nowadays that is no longer sufficient on the market. Of course, compact 2D standard systems for sheet metal processing often have their areas of application, but the cry for more has become louder and louder. Be it through additional integrated machining technologies such as drilling, scanning or marking. Be it through the processing of sheet metal but also tubes and profiles. The step from compact lasers to fully automatic machines has already been taken. Not only the cutting process is to be automated, but also the automatic feeding from the rack storage, the sorting of the cut parts and the separation of waste parts as well as the unloading of the material is required. The idea: an unmanned all-round machine.

MicroStep has taken this idea into account over the last decade and has gradually developed its fibre laser product line into a modular system: “This allows us to configure the systems according to customer-specific focus. Whether it is a simple machine or the wishes extend to complex cutting centres with different processing sizes as well as solutions for the automation of material handling,” explains Dr.-Ing. Alexander Varga, Head of Development of the MicroStep Group. Equipped with state-of-the-art laser sources and cutting heads, efficient fume extraction systems and safety cabins to protect against laser radiation, these machines are supplied as turnkey solutions with a wide range of functions.

The portfolio includes a wide range of automation solutions that make unmanned production a reality. The central component is the MSF laser series, which can be configured as a 3D system with many tools for processing sheet metal, tubes and profiles. A number of processes are already automated: Adjustment of focus position and focus diameter, distance calibration and cleaning of the nozzle or even the nozzle change. This also includes an automatic shuttle table and automatic cutting waste disposal. But there are other systems around the machine that take automation to a higher level.

For example, the MicroStep MSLoad system. The material handling system has a modular design and is used to automatically load raw material and unload cut parts. MSLoad can be combined with the MSTower storage system and the MSSort parts sorting system and, as a trio, unfolds its full automation power. The MSTower storage system provides buffer storage for raw material and finished cut parts and is integrated into the material flow. MSSort separates cut components from waste material after the cutting process and sorts them according to customer specifications. In addition to flat material, MicroStep can also automate the material handling of tubes and profiles – thanks to the flexible MSFeed systems. With MSFeed, a loading and unloading unit is available for tubes with diameters up to 200 mm.

Another solution to further increase throughput is MicroSteps MSLoop. The shuttle table system consists of a total of three cutting tables that move in the paternoster principle and enable the simultaneous loading, cutting and unloading of small to extremely large-format sheets.